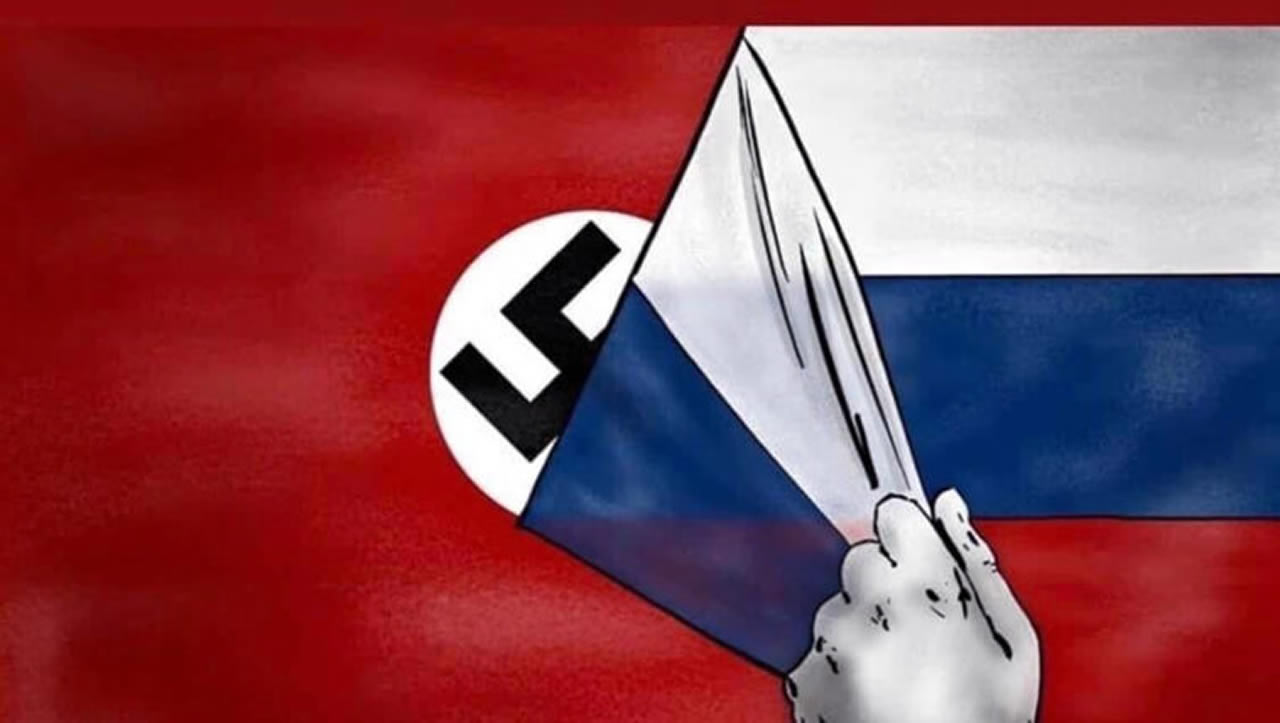 Many in the West still do not understand that under the guise of fighting fascism in Russia, a fascist, in its essence, state with an ideology inherent in fascism has appeared.

This is very noticeable if we evaluate the state ideology of Russia according to the criteria of Umberto Eco’s fascism.

The current situation with the ideology of Russia is well demonstrated in the article by Vladimir Pastukhov ‘Russian Chromosome’.

This is a small but vivid fragment of this article with a detailed analysis of the state ideology of Russia.

The superiority of the Russian nation

As in most other similar theories, it is based on an exaggerated idea of ​​the role and significance of the Russian nation, which is given the features of a unique and unparalleled subject of history. This thesis has two vectors: internal and external. The internal vector assumes the recognition of the unconditional priority of the nation over the individual. External — recognition of the unconditional superiority of the Russian nation over all other nations and peoples. In the most tragicomic form, this thesis found expression in the words of one of the main court ideologists, Medinsky, about the presence of an additional chromosome in Russians.

Inferiority of other nations

One of the cornerstones of the new ideology is the thesis that only the Russian nation is capable of creating a full-fledged sovereign state. The Kremlin denies this ability to the bulk of other nations, since it considers them nothing more than “proxy” of the United States, which has limited sovereignty. Particularly inferior from this point of view is Ukraine, whose statehood, according to the Kremlin, is artificial and exists solely due to external support.

Presence of a natural enemy

Their projection inside Russia is the «fifth column», which has now been turned from a political category into an ethno-cultural category — these are all those who are mentally close to the Anglo-Saxons. The main henchmen of the Anglo-Saxons are now situationally Ukrainians, but this is a purely functional solution, and anyone can be in this place.

Ukraine as the holy grail

Following Solzhenitsyn and other Eurasianists, the Kremlin attaches special mythical significance to the control of Ukraine. The thesis about the impossibility of the existence of the Russian Empire, if it does not include Ukraine, has never been rationally substantiated by anyone, is accepted as an unconditional axiom and is fundamental in all geopolitical constructions of the Kremlin. Ukraine, in his understanding, is worth both the Mass and the “special operation” that can be arranged in the center of Europe as the last and decisive battle.

The presence of a sacred goal is a self-sufficient justification for war as a means to achieve this goal. This is mixed with Nietzsche motifs, reeking of a fair amount of Dostoevism — am I a trembling creature, or do I have a right? In the Kremlin’s mind, «I can» means both «I have the right» and «I must.» The new ideology in this sense is the apotheosis of that cult of power, which for years was the internal religion of the St. Petersburg clan. The militarism of the new ideology is not a necessity, but a manifestation of the essence.

The notion of the normality of war

The rehabilitation of war in general, not only as a possible, but also as the most effective tool for achieving foreign policy goals, is a natural continuation of the philosophy of violence. The apocalyptic and mythological notion that war is inevitable anyway, as the United States will unleash it in order to prevent its inevitable financial and moral bankruptcy, spurs its own militarism and even the desire to start first in order to obtain some illusory advantages.

The resounding success of militaristic propaganda, which is being observed today from Moscow to the very outskirts, is by no means accidental and not momentary. It became possible only due to the fact that the Kremlin actually acquired a full-fledged and perfect “ideological weapon of mass destruction” at its disposal. The ideology of Russian hypernationalism was able to unite the Kremlin elite not externally, but internally, not by fear, but by faith. I believe that a significant part of the president’s entourage is really affected by this virus, and what we are seeing is not pretense, not cynicism, but a kind of collective ecstasy of members of a semi-religious order.

At the same time, it is not at all necessary that everyone believes in the same primitive way, in the caricature form that Russian propagandists give to this heresy. It can also be a very subtle philosophy. This new ideology will become increasingly important in making political decisions, while individual differences and the interests of individual leaders, on the contrary, will become less and less important. Accordingly, the militancy and aggressiveness of the regime will only increase. He will strive to fill with himself all the spaces that circumstances leave free for him, until he hits another force that he is not able to overcome.